posted by Lyubomira on October 15, 2020
Print Recipe Jump to Recipe

Red Pepper And Tomato Spread Lutenitsa Recipe – traditional Bulgarian treat, a type of chutney, made with roasted red peppers, tomatoes and carrots and eggplant at times. This tasty spread is popular on the Balkans – Bulgaria, Serbia and Macedonia (with slight variations and other names on a few other surrounding countries, but this is a completely different story). 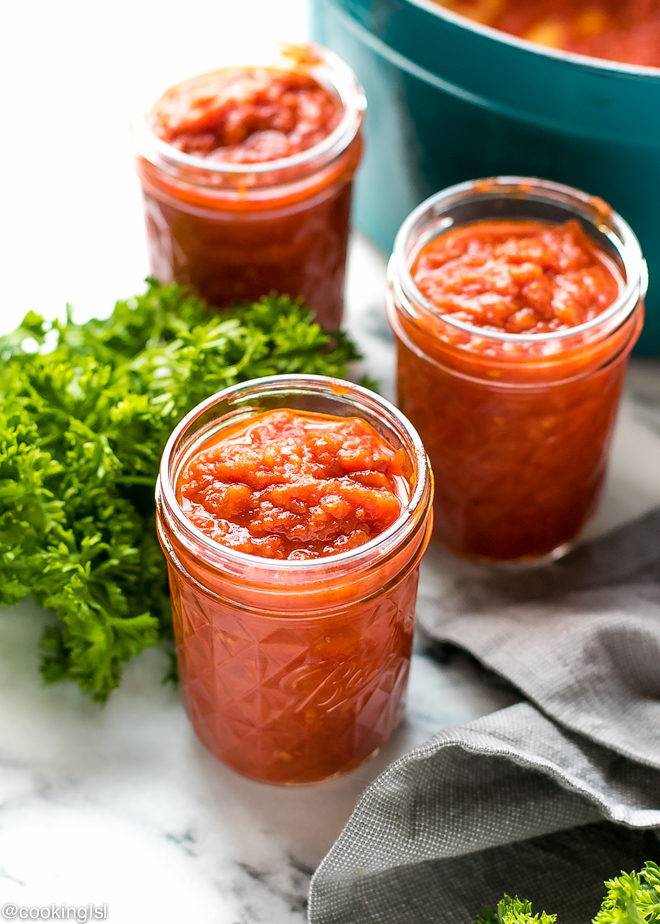 Sharing with you today this Bulgarian Red Pepper And Tomato Spread Lutenitsa Recipe, since most of you know, I’m Bulgarian, but now live in the US.

It is unbelievably easy to make and tastes great on crackers, bread or as a dip (side dish) for sausages, meatballs or grilled meats.

If you go to a restaurant in Bulgaria, you can most likely get to try lutenica. You can order it as a side, in a small dipping container.

Here in Chicago, where the Bulgarian population is the biggest in the US, there are a few Bulgarian restaurants and grocery stores, so store bought lutenitsa is widely available. Surprise, but I rarely buy or order it at a restaurant.

This doesn’t mean that I don’t love it, but I prefer  homemade Red Pepper And Tomato Spread. 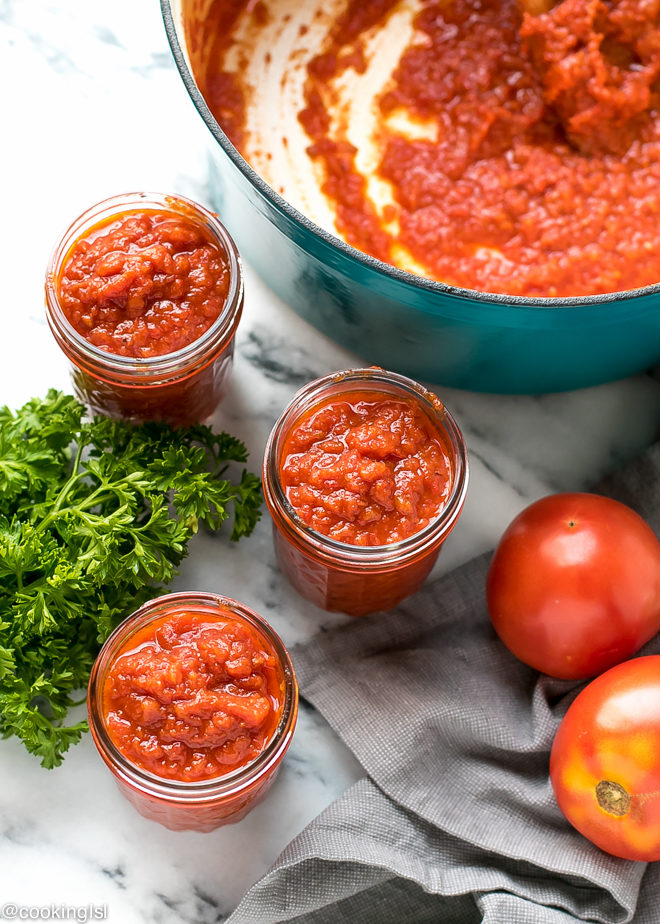 This means that I sometimes have to make it myself.

The taste of freshly made lutenitsa is so much different than the one offered at the store. Here it is important to emphasize that there are variations on ingredients.

The two basic ones are red peppers and tomatoes and I love its taste with just these two.

There are usually more peppers in lutenitsa than tomatoes, but I often make it with equal amounts and it still works well.

Some recipes call for onion, hot peppers, carrots or egg plant. I used to stick to the basic one – roasted red peppers and tomatoes, but I started adding eggplant (roasted and peeled) and some boiled carrots to it and it tastes really good. Roasted or boiled onion is a great addition to the stread.

There also is some salt and sugar added and some vegetable oil. This is it. 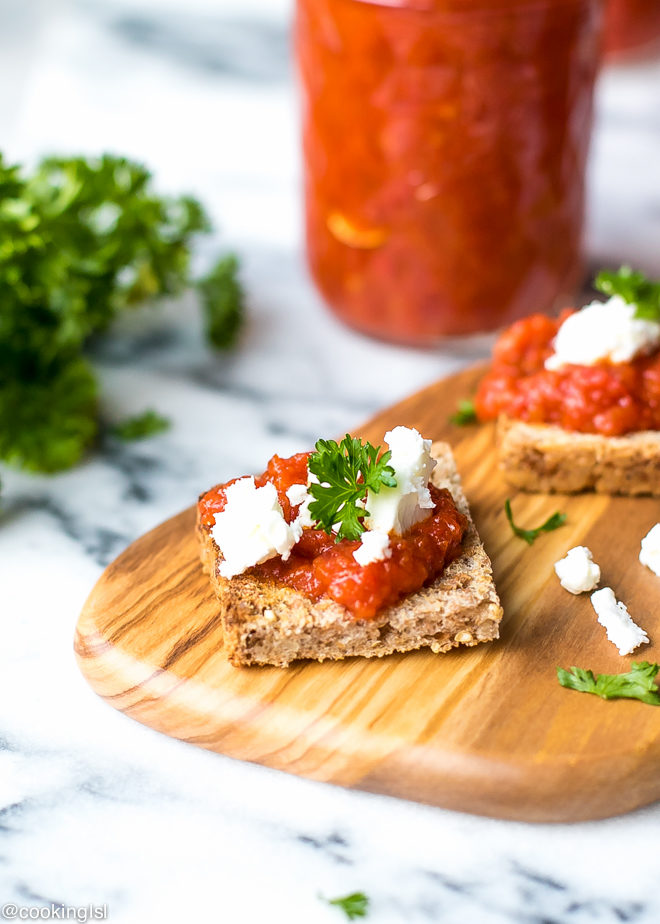 What peppers to use in lutenitsa?

I usually use red bell peppers or Piquillo peppers. Peppers called ” Red Kapia” are most often used for lutenitsa in Bulgaria. 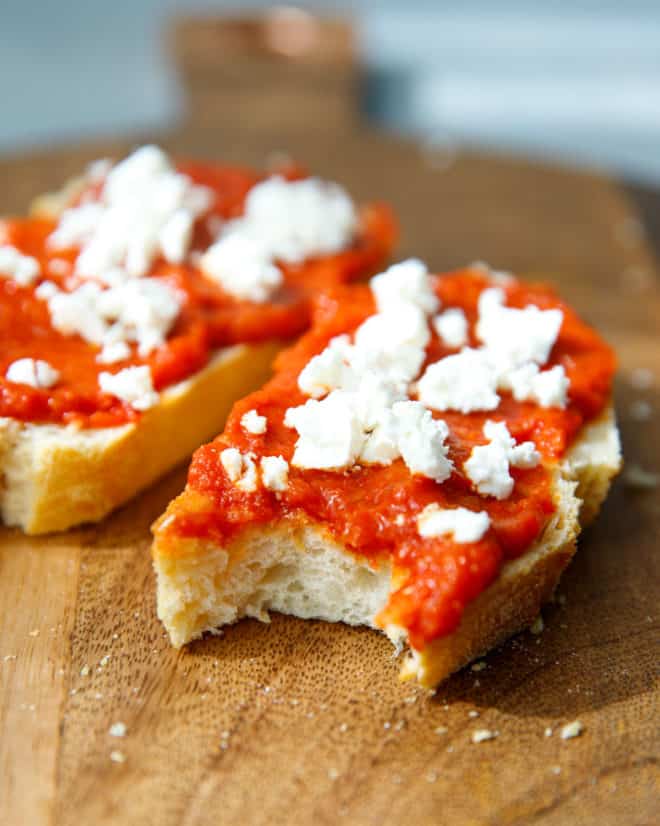 This is not a Traditional recipe. It is just a variation. This is the way I like it. This is the recipe I use to make lutenitsa indoors here in the US.

Why did I say indoors? Because lutenitsa is often made in huge batches outdoors in the rural areas in Bulgaria. It can then be enjoyed freshly made, but the rest is being canned to preserve for up to 1 year. Back to canning. But my family and I dislike the “smoky”, “charred” taste, so roasting the peppers and tomatoes in the oven is the way to go. 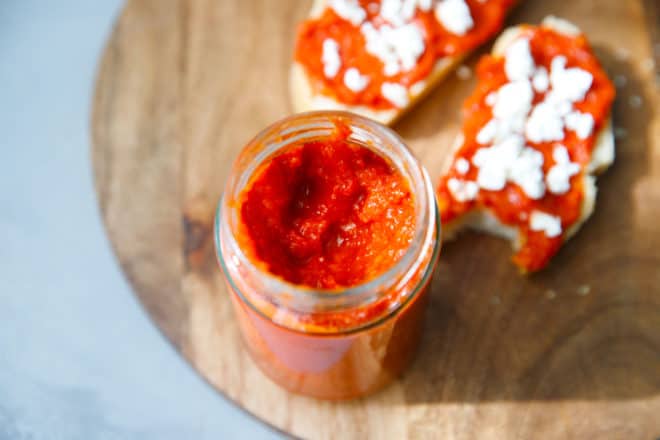 You do need to fill the sterile glass jars with hot lutenitsa and close the sterile lids. Then boil in a canning pot for 15 minutes (count the time after the water starts boiling).

When I shared the recipe for Easy Pickled Vegetables, I promised to share a recipe for lutenitsa. 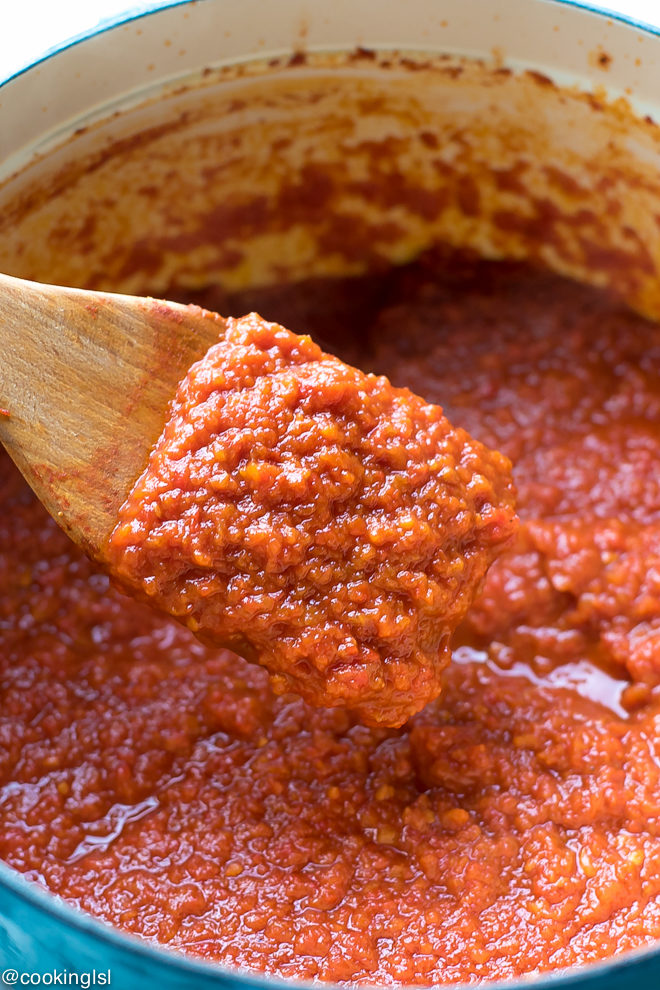 Prep Time:
1 hr
Cook Time:
1 hr 30 mins
Total Time:
2 hrs 30 mins
Red Pepper And Tomato Spread Lutenitsa Recipe - traditional Bulgarian treat, a type of chutney, made with roasted red peppers, tomatoes and carrots and eggplant at times. This tasty spread is popular on the Balkans - Bulgaria, Serbia and Macedonia (with slight variations and other names on a few other surrounding countries, but this is a completely different story). 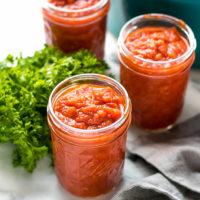 Print
5 from 6 votes
Leave a Review »

I'm not an expert in sterilizing.
I've gotten some comments regarding how unsafe it is to sterilize for 5 minutes.
For best results, please follow the guidelines here.
For best safe results - please keep the sterilized jars with lutenitsa refrigerated.
Course: Appetizer
Cuisine: bulgarian

(may include affiliate links) 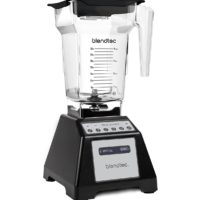 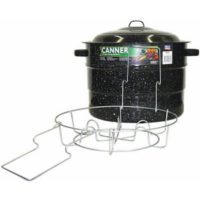 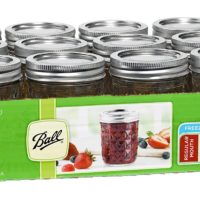 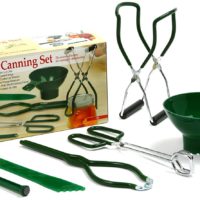 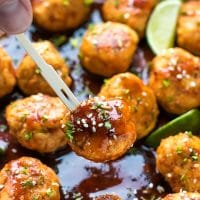 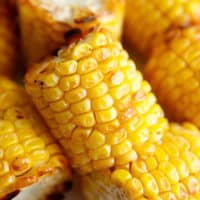 Corn On The Cob In The Air Fryer 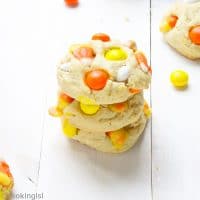 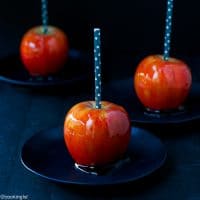 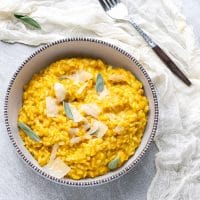 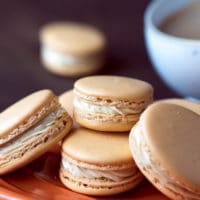